How could Ilan Ramon’s Diary Survive the Fall from Space?

A little while ago, the Israeli Museum in Jerusalem opened an exhibit featuring some of the torn, slightly burned pages of Col. Ilan Ramon‘s personal diary from the shuttle Columbia. Ramon was the payload specialist onboard STS-107 (the spaceshuttle “Columbia”) that disintegrated during re-entry from space, killing all 7 crewmembers onboard. The diary survived the re-entry and subsequent crash, and was found in a field next to Palestine, TX.

Ramon’s personal diary fell close to 37 miles (almost 60 km) through the extreme conditions of re-entry. Unlike its human owner, it has survived the process and is now being restored and presented to the public in the Israeli Museum in Jerusalem.

During the weeks and months after the Columbia disaster, pieces of the debris were still being collected from wide areas in Texas. small pieces of insulation that detached from the outer parts of the shuttle to pieces of the Astronauts’ space suits. In an article covering the subject on “Universe Today”, The Israeli Museum curator is quoted as saying that “There is no rational explanation for how it was recovered when most of the shuttle was not.” It is no wonder, then, that many are awe-struck at such an apparent miracle.

But is there, really, no rational explanation for the survival of the diary? None at all? I doubt that. And when I doubt, I check it out, which is exactly what I am about to do.

A thought (or two) about Hypotheses

The information about the Columbia disaster is available in many online and offline sources, but it is still very limited. We can guesstimate what happened to certain parts of the shuttle based on facts on the ground and what we already know from previous manned missions to space using the Columbia shuttle.

The general investigation I am about to embark on in this post is based on the material I have found online and my own personal knowledge, strengthened by facts from other missions and physical concepts. It is by no means complete, and I had no time (or resources, sadly) to do a full blown investigation into the full train of events that Col. Ramon’s diary went through. If you have any thoughts on the matter, or if you hold any factual data that will help hypothesize what it “went through” in the moments before hitting the ground, please share them in the comment section. I am very much willing to update and upgrade this hypothesis in light of new information or ideas (just make sure you base those on valid data, of course).

I try to support my guesstimates with valid data when I can, and use ‘extremes’ to get us a rough idea of how this discovery (and this ‘survival’ of such an item) is possible.

The space shuttle is built to sustain its crew for days (and sometimes weeks) in space. It has sleeping bunks, restroom and shower, all located in the crew area in the “Mid Deck” (picture is taken from Space Shuttle News Reference (NASA), p 5-5): 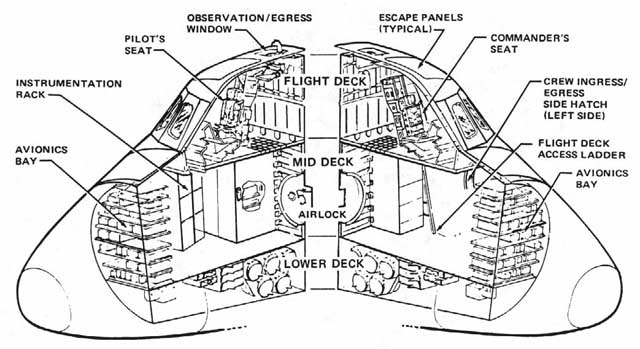 According to ex-astronaut R. Mike Mullane, the mid deck also holds the crew personal lockers (“Do Your Ears Pop in Space”, R.  Mike Mullane, pg 135). We will remember this fact when we consider the process in which the Columbia disintegrated (keep reading).

Where was the Diary Located?

No one can know for sure (at least not from the published data that I’ve read) where the diary was located before the Columbia’s disastrous descent. However, there are a few facts we can be sure of:

Either way, it seems logical to assume that the diary was placed somewhere that kept it safe from the initial processes of re-entry and descent.

Unlike common belief, the intense heat on the wings and body of a space shuttle as it descends from Space is not caused by friction, but rather by ‘compression’. The big body of the shuttle compresses air molecules downwards so strongly that the air around the shuttle becomes dense and packed like plasma. At this point, the wing-edge temperature naturally rise, and can reach a temperature of about 1,400° Celcius (2,500° Fahrenheit).

After the initial temperature rises, the Columbia initiated a roll to the right, a maneuver that decreases its speed and the heat on its body. This maneuver was successfully performed, and following it were 10 minutes where the heat on the body of the shuttle reached its peak. From there, it started to cool down.

The temperature at these heights is extremely low, and the heat from the shuttle can dissipate relatively quickly.

About 15 minutes after the Columbia entered the Earth’s atmosphere, pieces of debris were visibly shedding out of its body. But the Columbia did not explode, it disintegrated, and this difference is very important to understand what happened to the parts inside the shuttle.

Explosion is quick and “dirty”, resulting in a lot of damage to the individual parts. Disintegration is the breaking apart of the whole into individual, smaller, parts. It is usually slower, and gradual. The Columbia’s disintegration began about 10 minutes after re-entry and lasted until the massive body crashed on the surface. The various parts and debris were scattered over an enormous area, from eastern Texas to Western Louisiana.

The fact that the Columbia disintegrated, rather than exploded, has two main meanings for our investigation:

The objects inside the Columbia slowly broke apart and began a gradual free-fall to the ground, from varying heights, the largest of which is approximately 60 km above the surface of the Earth.

The shuttle is designed and built for aerodynamic movement. From the nose, to the wings and tail, the purpose is to make sure its movement in the air is smooth and with as little drag as possible. This is meant to decrease drag and allow the pilot better control over the movement of the shuttle once it’s back inside the atmosphere.

Aerodynamic objects move very quickly through the air because of their shape. But Columbia began disintegrating about 40 minutes after initiating the ‘de-orbiting’ maneuver. Parts tore off its body, probably starting with the wings and tail (that ‘stick out’ of the body and are subjected to more heat and pressures). Once those pieces – and pieces of the outer hull – tore off, the Columbia lost its aerodynamic shape. From this point on, it will slow down dramatically.

Terminal Velocity of an Object

In reality, when an object falls from a certain height down to the ground, its velocity increases because of the pull of gravity. Air resistance, however, exerts a force upwards – “fighting” the downward acceleration. When both forces are equal, they both negate one another, and the object falls in a constant speed (without the effect of any acceleration). That speed is called ‘terminal velocity‘.

For example, a sky diver falling from 12,000 feet would stop accelerating (hence, would move at a constant speed) at about 200 kph (124 mph). If his parachute didn’t open, he would hit the ground at the same force that a motorcyclist going at 200kph would hit a cement wall in case of a head-on collision (don’t try this at home). The height, in the case of the speeding diary, is not a very good indicator as to the force it hit the ground with.

Terminal Velocity and the Falling Diary

Assuming the diary was protected during the initial stages of the disastrous descent (as I’ve already explained), it shouldn’t have fallen as fast as it may sound like. When we hear the height “60 km above ground”, it sounds as if the falling object would hit the ground at enormous speed (and force). That, however, isn’t the case, because of the terminal velocity.

It is very much possible that the diary was packed or partially protected during parts of the fall, stopped accelerating at the terminal velocity. The pieces continued to disintegrate as they fell, and at some point whatever ‘protected’ the diary disintegrated and exposed it to the full force of the fall. But by that time the conditions that existed at the beginning of the fall were considerably lessened.

Based on all the above, it is a bit easier to see a logical trail of events that could lead to the survival of a paper diary. This isn’t a miracle; it’s a surviving piece of history in light of a horrible, disastrous space mission.

A bit of Realism (Other objects made it, too..)

So we’ve examined the situation, and saw that it’s not as unlikely as we might have first thought for such an item to survive the Columbia disaster. A lot of other debris have survived, including ‘sensitive’ materials such as CPU boards and pieces of cloth from the astronauts’ uniforms and rest area. But we also need to take into account the condition in which the diary was found.

According to the State of Israel Ministry of Public Security, which was responsible for the reconstruction and preservation of these pages, the diary was very hard to decipher. It was found wet, torn and crumpled in a muddy field (see picture). The efforts involved a lot of digitized reconstruction along with some measure of guesswork. Some of the text on the pages was simply incomprehensible.

That said, it is also important to remember that this is not the most “surprising” piece of debris that “survived” re-entry. If you want surprise, it is reported that a few worms survived re-entry and the fall to Earth. Yes, alive. A piece of crumpled, wet, torn paper, as emotional and touching as it may be (and I agree that it is), is hardly any competition to life forms surviving the fall to Earth.

This is no miracle.

Many thanks to Capn_Refsmmat for (again!) being the brevity King, and for asking questions that needed to be answered.

I get that rpg games go for realistic background noises but can we please stop with the random dude that whistles without even carrying a tune? thanks