DNA Madness: Extracting your Own DNA in your Kitchen! 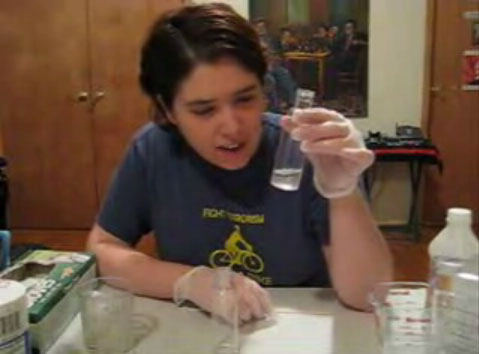 The human body is an incredible machine. Though far from being perfect, we have evolved to what we are today through a process that took millions of years of mutation and natural selection.

There is one little piece of us, though, that holds the secret to our existence, and the history of our species: The DNA.

My main interest is usually physics and astronomy, but I have always been fascinated by that double-helix molecule and its meaning, both philosophically and realistically; since the beginning of Genetics the human race have progressed exponentially. It’s just, simply, amazing.

So when the “rogues” of “The Skeptic’s Guide to the Universe” Podcast debated the history of DNA discoveries, I decided it is time for some biology experiment.

I am about to show you how to extract your own DNA from your own bodies in your own kitchen. Yourselves.

This experiment allows you to extract DNA matter from cells from your mouth, and is very similar to what Friedrich Miescher discovered. His discovery was from pus, and this one is from your mouth. Physiology can be funny like that.

What do you need?

For this experiment,you will need the following tools:

You can find the process I used for this experiment in the repository of About.com biology expert, but here’s a short summary:

Well, DNA exists inside the nucleus of a cell. So to see it, you need to first let it out of its confinement. But that isn’t enough – DNA molecules are positive charge, so they reject one another. In order to see the strand, we need to make sure a bunch of these molecules bond together. Finally, DNA melts in water but not in alcohol – we will use that to “trap” the strand so we can look at it.

So, here’s the summary:

There you have it. Your own DNA in a bottle. Beats wooden boats any day.

Usually, when we hear that someone a long long time ago made a very big discovery we tend to be skeptical. It’s understandable – I find it hard to see anyone getting along without a fast-paced computer, let alone working without an electron microscope, or a light bulb.

But the truth is, usually scientific discoveries don’t just “pop up” miraculously. We tend to remember the people who invented specific “gizmos”, or wrote a patent relating to a specific discovery (like Edison and the Light bulb, Bell’s telephone, and Morse’s telegraph), but they were rarely “the first”. The research started a long time before, and their discoveries were possible only due to past discoveries.

The same is true to DNA.

In 1962, James D. Watson, Francis Crick and Maurice Wilkins recieved the Nobel Prize for the discovery of the structure of DNA and its hereditary role. Because the Nobel Prize is a famous honor, we tend to remember them specifically, but their discovery was possible because of many prior researches, the first of which was done by a Swiss researcher called Friedrich Miescher in 1869.

Miescher researched the human cells, specifically white blood cells, by taking blood-stained bandages from a nearby hostpital. He noticed a microscopic substance inside the pus on the bandages – and identified the substance as coming from within a cell’s nucleus. He called this substance “Nuclein”.

The following dates mark the time line that lead to the famous discovery of the DNA structure in the 1950s:

Wow. That’s going to be a huge huge list. The discovery of Genes, structure of DNA and Genetics in general has led to countless advancements in medicine and technology. From discovering diseases earlier to devising vaccines. The list is just too great, too big, and too important to summarize in a single post. If you look at the resources, however, you could find many places to start.