Measuring the Speed of Light at Home

Consider: You’re a deer on a dark road. A pair of headlights is suddenly approaching you.Fast. You stare at it intently, wondering – how fast is the light moving? Now, if you’re that deer, chances are this wouldn’t be your first concern.Or maybe it would.Maybe that’s why they take so long to move away… long calculations about the speed of light flood their minds.. 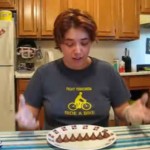 Note: If you have been to this post before, you might’ve missed quite a big error that was spread around through the text. Accidentally, I wrote 300*10^8m/s instead of 3.0*10^8m/s which is quite a large difference (and is absolutely wrong, too!). I apologize for the mistake, and hope that if you came back, at least I can correct it so that readers will have the correct number. The speed of light is 3.0 * 10^8 m/s – or 300,000,000 m/s. Thanks to Gonelli for the sharp attention 🙂

Of course, any educated deer knows that light moves at approximately 3.0*10^8 meters per second, which is very fast. It is wise, therefore, to move away very fast. But, as luck goes, by the time that realization passes the deer’s mind… well, you know. Poor deer.

But, that’s life. It’s not the only disturbing thing that may happen with speedy objects rushing through the air. It once struck me that I had no idea how baseball announcers knew the exact speed of a flying fastball.How about the speed of a baseball that’s just been hit out of the park?How fast is it traveling when it hits that car window in the parking lot?It’s moving so fast you couldn’t possibly measure its speed without fancy instruments.So, if its so hard to measure a baseball’s speed, how in the world can we measure the speed of light?

How can scientists be so sure of its speed with such certainty?And why should we believe them?

So.. no more! You don’t have to take their word for it. From now on, you can measure it for yourself with this – pretty nifty – home experiment.

About 10 minutes (with a calculator.15 without one. Could be a lot more if you forgot your fifth grade math).

There will be some inaccuracy in your result (my own calculations had a percent error of 6.3%). The size of this error is important, because it can help us understand what external factors played a role in our experiment.If you stop to consider your results, why you got them, and what they mean, it’ll help you understand how light works.

Since this experiment is done at home (which is not conducive to precise measurements, unless you live in a physics lab, in which case I am willing to relocate for a domestic partnership) there are several external conditions that could distort the measurements and lead to errors.This is by no means a complete list, but here are some external factors that I thought of:

To try and eliminate such mistakes from affecting real experiments, real scientists never stop after only one experiment. The tests are repeated over and over again, and sometimes even over again, again, and all results(failures and successesses(whatever)) are recorded and analyzed. My experiment was only a demonstration, but if I’d have done it a few more times, and taken an average of the distance between entry/exit points of the wave, my accuracy level would probably rise.

Despite all this, I have to say: measuring the speed of light in non-lab conditions, using a bunch of Hershey’s Kisses and a plastic ruler, and getting only a 6.3% percent error, well, that ain’t too shabby.

Isn’t light brilliant?- I know, I didn’t laugh either.

(lots of thanks to Daniel, who helped me out with English, jokes, and a decent way of combining the two.)

Original idea (You can also find more information of how to conduct this experiment yourselves):