Richard Saunders in 3D (and 2D): Testing the Shroud of Turin If you’ve been following my skeptical adventures, you know I have attended the Amazing Meeting 6 (organized by the James Randi Educational Foundation) about a month ago in Las Vegas. Not only have I had a blast and met lots of wonderful people, but I also had the privilege of doing a LIVE experiment with none other than Australian Skeptic’s Richard Saunders.

This was an awesome experiment in an already awesome convention. Don’t forget to check out the JREF website for the DVDs and extras from TAM6. Richard Saunders’ many projects can be checked out through the Australian Skeptics website and the Tank Podcast.

When you convert a 3-dimensional object (a face, for example) into a 2-dimentional surface (a page, for example), your end result is stretched and distorted. The reason lies in the curvature of the 3-d object you are trying to copy: The curvatures that give your face the shape it has (your nose, your mouth, your ears), will appear longer when stretched to a flat surface.

What is the Shroud of Turin?

The shroud of Turin is a piece of linen that seems to bear an image of a man lying with his hands in his lap. Some religious groups claim that the image is, in fact, the image of Jesus after his crucifixion. 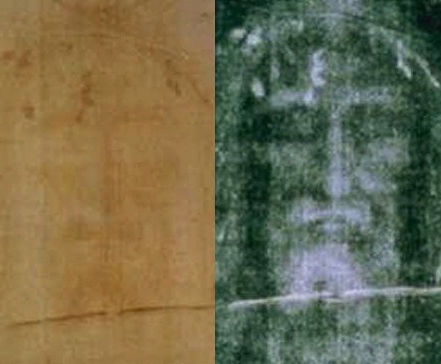 Whether or not this shroud is real (Scientific examination of the fabric and impressions on it show it is dated much after it is supposed to exist to be authentic), the image that is transcribed on it is interesting. Missing the impression of the face on it is quite hard, and explaining it away with ‘simple’ paraedolia doesn’t seem to do it justice. 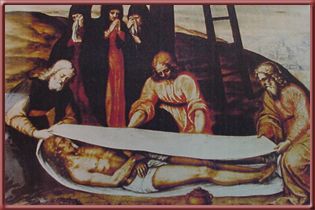 But if we take our experiment to mind, this image seems to get a different perspective – literally. Take a look at the above drawing, for example, (by Giulio Clovio), depicting Jesus being wrapped in a shroud after his crucifixion. If, truly, this cloth covered the face and body of a man (any man, for that matter), then the impression should not have appeared as a face at all, it should have appeared distorted. A relatively simple test – print out the image, then fold it in half along the nose line – casts some doubt by itself on the existence of a human model for this image.

How are flat maps made?

The creation of a flat map is similar, but not exactly the same as what you have seen in the video. Since distorted maps are quite useless, the drawing of a flat map uses a technique called “Map Projection”. Essentially, the glove is divided into equal squares which are also drawn on a flat surface map. Each square is copied in exact details to the corresponding square in the flat map.

There are several types of such projections, depending on the type of map you need.

An “Equidistant” projection creates a map that has equal distances from the center (equator). A “Zenithal” projection is one that maintains accurate directions.

In general, a flat map is not the accurate depiction of the way our planet looks. It can’t be, because our planet is spherical. But a map projection, at least, makes the conversion slightly more accurate, and easier for our brain to calculate distances and shapes.

More information about the creation of flat maps out of the curvature of our planet can be found in this website (also on the ‘extra resources’ section at the bottom of this page).