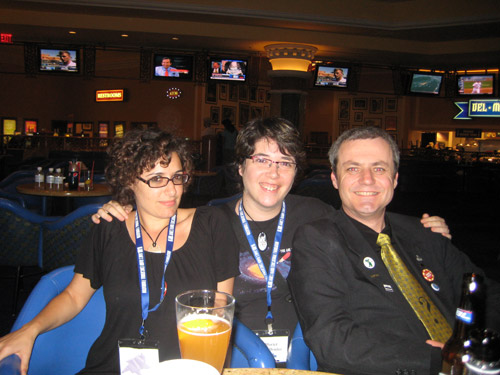 Here it was again this year, The Amazing Meeting 7 in Las Vegas, organized by the James Randi Educational Foundations (JREF). As you may remember from last year’s updates, TAM is usually awesome and this year was no exception. I also had a great time experimenting with sounds from beer bottles at the pub with Richard Saunders and friends. Totally awesome. 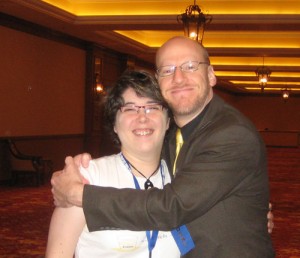 I met so many cool people, made new friends and greeted some old friends again. I had a great time seeing Phil Plait, the Bad Astronomer (and president of the JREF) again (see picture above), schmoozed with Jamie from “The Cuter Side of Politics” (picture below, with Richard Saunders), watching the very talented Sarah Trachtenberg do her stand-up routine at the TAM Talent Show, and got to do an awesome audio recording with Richard Saunders from the Skeptic Zone that included beer, Australians and sound. Awesome!

I had the great privilege to sit down with Richard Saunders, Brian Dunning (from the awesome skeptoid.com) Amanda Rose,  and others to record a special edition of the Skeptic Zone’s Think Tank at the sports bar in the hotel. We sat down with some beers and had a great time sharing a nice little demonstration about the different sounds you can make with half-filled beer bottles.

You are encouraged to listen to the entire episode, where Richard updates from The Amazing Meeting with some interviews and snippets from the different speakers, but if you want to jump straight off to the Think Tank experiment, it starts about an hour and fifteen minutes (1:15) into the show.

Richard drank all the beer in his bottle, while I drank only a little bit. Mine was almost full, while his was almost empty. Tapping both bottles produced different sounds; the empty bottle produced higher pitched sound and the full one produced lower pitched sound.

Why does that happen?

The Awesomeness of TAM

I had a wonderful time in Las Vegas at The Amazing Meeting 7, and I just can’t wait for next year’s Amazing Meeting 8. Are you coming? You should, and if you end up there, walk around, make new friends, and hunt me down to say hello. It’s the best time of year!

Update: You can find more pictures of the great experiment with Richard Saunders at TAM7, in sc00ter’s TAM7 flickr album.

This is one of the best scientific analyses I've read. They're having so much fun with it, too.

"[...] International espionage is possibly the only profession that overshadows our branch of academia in these respects."

what if instead of getting the pfizer or moderna vaccine, you got a VaccineProvider in your arm instead? now you can swap out whichever vaccine you like

I call it... Dependency Injection