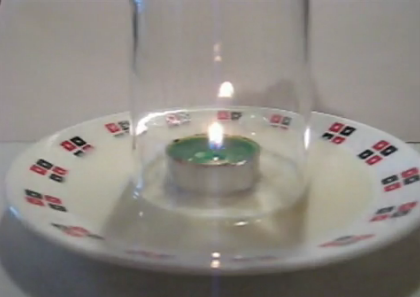 Well, this is going to be sweet, short and to the point: Fire in closed spaces can really suck.

Ha, I was dying to use that pun for a while now, and here I had the chance. This experiment is a really short and sweet one, and can join your mental arsenal of “party tricks” for the partying geeks. It can really impress anyone, and from now on – you are going to know what makes this happen.

Notice: This experiment is incomplete, and unclear. There were several attempts to correctly state the situation, but at the moment, a new re-make is planned to explain exactly and thoroughly what is happening to create this phenomenon.

Air is a fascinating thing, but sometimes it can be an obstacle. We will see that in future experiments, where the existence of air (or, more precisely, of oxygen) can hinder an experiment and render it unexperimentable. … Right. I think I need a dictionary replacement.

In case this isn’t completely clear, I am going to point out that since we are dealing with a live and exposed flame, the use of any high-percentage alcohol is absolutely not recommended.

I hope that is obvious, but in case it’s not – ALCOHOL IS FLAMMABLE. SO IS GASOLINE. Don’t do something very stupid, don’t use flammable liquids in this experiment!

(Thanks to RedShiftScience for pointing out people might not find this obvious.)

Before I go on to corrections, let me say a word about getting things wrong: Human beings are usually emotional entities, and as such, we tend to take things personally. Science is supposed to be empirical, void from emotions. How do you connect the two? Using the scientific method.

There is no shame in getting things wrong. We are only humans.

The best thing about science and experimentation is to have other people think about things, analyze them, and criticize your work. I not only enjoy that, I think it’s a necessary part of science.

In my video, I explained a few things incompletely, and some even seemed to have come across bluntly wrong (aaa! matter is not created out of nothing, and it does not disappear! in failing to mention that, I sounded like this experiment defies the laws of thermodynamics!). So, I am hereby correcting, adding and subtracting to what I said. I tried to do that well in this post — and then Shane Killian — who noticed this error first – posted a video reply.

So now I can just post it here instead of doing it all over again. Cheers, Shane, GREAT job, and thanks a lot for the correction!

Don’t ever be afraid to try just because you’re afraid to make a mistake.

What is a Vacuum?

A vacuum is a volume of space with no matter in it, and a zero atmospheric pressure. That is the formal definition. That said, there are no places in nature that have absolute vacuum.

We tend to call “Outer Space” a vacuum, but in reality, it is filled with particles, which makes it have some sort of matter, which means it’s not a complete vacuum. But it’s close enough.

That’s why you see people get sucked out of the airlock in sci-fi movies. It’s one of those things movies got right.

In our experiment, we lowered the pressure and created a semi-vacuum inside the glass, and in turn, it sucked up the liquid around it. Or, more specifically –

With this cool little party trick, we are creating a “semi” vacuum inside the clear glass by consuming the oxygen inside it. When the fire consumes the oxygen molecules, it “vacates” a place for – well – whatever else. The pressure inside the glass rises, and since it isn’t sealed, it sucks whatever it is standing on

CORRECTION: The pressure inside the glass increases as the fire heats up the molecules. Oxygen is being “consumed” by the fire, that produces Carbon Dioxide (the matter itself remains, no matter is mysteriously ‘vanishing’ or ‘created’ out of nothing!). But now, the pressures are different and therefore the water outside the glass are pushed inwards — the lower pressure of the INSIDE ‘sucks in’ the liquid around it under the pressure stabilizes.

Thanks to Shane Killian for the correction.

If I were to use a jar and sealed it well while the candle inside fed on the oxygen, the cap would have been “sucked” into the jar mouth, and the jar would have been sealed. Since I am not using a cap, but rather putting the glass on top of liquid (that can “pass through” the edge of the cup), the liquid is sucked inside the glass and stays there, until I release the pressure and allow air in.

This is a really sweet, cool and short experiment, but the best thing about it is that it will help us produce home-style vacuum setting for other experiments. And so, it’s good to know.

English Wikipedia was launched on 15 January 2001, exactly 22 years ago. 🎈 #WikipediaDay

Since then, more than 6.5 million articles have been created.

Wikipedia editors CANNOT DECIDE WHAT TO CALL THIS THING. By my unofficial count, the 15-year-long debate is ~65k words — as long as a novel (thread)