A Party Trick for the Watery Dense: How to Switch Alcohol and Water Between Two Cups 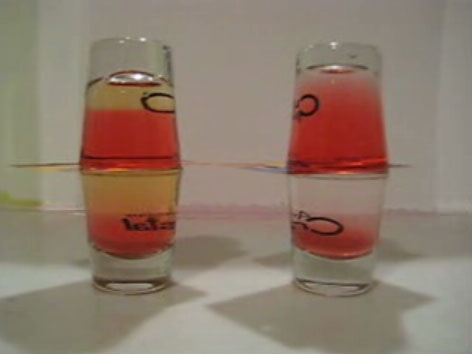 Water is dense. Alcohol is Dense. But they’re not the same density, no siree. They’re differently densed. Which means we can use that to our advantage. And we do, in this experiment.

Well, this is more of a “Show off your geektitude” physics trick that will amaze and enchant your buddies anywhere! Okay, well, maybe not anywhere. Or anyone. But it is geeky, I promise. And will get you some attention.

And it’s useful. For parties.

I can switch the contents of two glasses without using a third glass. Yes, I can. Don’t believe me? Well – When in doubt, try it out!

So. Anyone who asks a bartender for anything “on the rocks” knows that alcohol and water do not mix. Not properly, anyways. Not without insistent help. The alcohol always ends up floating on top of the excess water that melted off of the ice. But why?

Well, that has to do with the density of both liquids. Dense materials sink, and less-dense materials float. Water is denser than alcohol, so the alcohol floats on top of the water.

Density also changes with temperature. Water is denser when it’s cold. In higher temperature, the density is lower. Hotter water will always “want” to rise up above colder water. And we’re using this property in this nifty trick. Did I say it was cool?

Density is the measurement of mass per unit of volume. Put simply, it is the amount of particles within a specific space in the material used. A bar of gold will have a lot of particles within 1cm cube volume, while water fume will have very few in the same space. So gold is denser than fume. Which is why we choose to wear it as jewelry.

In physics, the general formula is represented by p=m/v, which means that density is mass per volume. If you know the mass and you know the volume (both quite easy to figure out), you can find the density of objects. This is another cool experiment that will be coming up in the future, and you can try it out yourselves with anything, really, as long as you know its volume (size) and weight (and can figure out the mass). Just be careful who you ask..

Why leave a small hole between the cups?

We don’t want our two liquids to mix, we want them to “switch”. When you leave a tiny hole between both cups, a stream of liquid from the bottom cup is flowing upwards, because it’s lighter, and is replaced by a stream of liquid from the top cup (the ‘heavier’ liquid). If we completely discard of our separator, the liquids will simply mix, and we will have diluted alcohol. Or room-temperature water.

When the process is allowed to happen slowly, after a few minutes, both cups are completely filled with the opposite liquids.

Materials needed for the Experiment

Don’t drink and drive.
We will go over momentum in future experiments, but this is one thing you all should know.

You mean other than being the star of a party? Oh, okay okay, here are a few practical applications for knowing the density and buoyancy of liquids: